FEBRUARY 21,  2020 / COLUMBUS, OHIO – Land-Grant Brewing Company is excited to bring back their iconic Columbus Crew SC Supporter Beer, Massive Juicy Pale Ale, in spectacular 16oz. commemorative “Jersey” cans celebrating the club’s twenty-fifth season of MLS play. Each can features an iconic kit from Crew SC’s history and a fact about the season those shirts were worn on the field.

These special, limited edition, cans will be available exclusively at MAPFRE Stadium and for carry-out at Land-Grant’s Franklinton taproom. As an extra bonus each four-pack of beer will feature up to four different can designs in the same pack.

“We worked with our beer label producer to develop these labels so that thew six designs are printed in a row on the same spool. So every six cans coming off the line has different art,” says Land-Grant President and founder, Adam Benner. “Our packaging process isn’t that automated, so we cannot guarantee that all four will be different,  but odds are you’ll be getting three or four different cans per pack.”

On Saturday 2/22 Land-Grant will make these cans available for the very first time during a full-on Crew themed pre-season extravaganza. Representatives and players from the club will be on hand, as well as a handful of the actual kits being celebrated! The taproom will re-air the Crew’s MLS Cup win from 2008 leading into the broadcast of the team’s pre-season match against Houston at 7pm.

Massive is available in its regular 12oz six packs in the taproom and at Central Ohio craft beer retailers now. 16oz Commemorative four-packs will be available for purchase in the Land-Grant Brewing Company Franklinton taproom starting Saturday, 2/22. They will also be available for on-premise consumption at MAPRFE Stadium during 2020 Columbus Crew SC matches.

The new Columbus Crew SC Supporter beer, as voted on by the loyal fans, will be available in the taproom starting tomorrow, Friday April 5!

Today Land-Brewing Company we’re very excited to announce the launch of our Supporter Series line of collaboration beers, a project that grew out of its partnership with, and support for, Columbus Crew SC. The Supporter Series teams Land-Grant up with world class breweries from around the country that are closely aligned with their home-town MLS clubs. The series launches with an American Pale Ale brewed for Columbus’ match against Dallas with Texas brewery, Peticolas Brewing, and continues with a Hoppy Saison brewed with Kansas City’s Boulevard Brewing Company.

“We created Glory American Wheat—and subsequently, For Columbus Black Lager—as beers brewed specifically for Columbus supporters and their pre and mid-match rituals.” says Land-Grant Co-Founder and President, Adam Benner,“ We knew that we weren’t the only brewery out there with a passion for soccer, and thought it could be fun to bring rival sides together over well crafted beer.”

Brewed to commemorate Columbus’ August 26th match against Dallas, Matchday Pale Ale is an American Pale Ale that combines one of Peticolas’ signature hop bills with one of Land-Grant’s. “This is a massive day for us. Soccer runs throughout our veins,” says Michael Peticolas of Peticolas Brewing Company, “We’ve supported FC Dallas for years and regularly host FC Dallas supporter group tailgates, but nothing beats being able to finally enjoy one of our beers while watching the local club on the pitch.”

The second brew in the series, created for Crew SC’s September 10th match against Kansas City, combines Land-Grant’s supporter beer, Glory American Wheat, with Boulevard’s popular Sporting Saison to create Stoppage Time Hoppy Saison. This beer is a spicy refreshing Saison aged on Missouri Oak and brewed with Ohio Spelt and Honey. “We’ve had a wonderful partnership with Sporting Kansas City over the past few years,” says Boulevard’s Brewmaster, Steven Pauwels, “including the creation of Sporting Saison back in 2015. This seemed like a prime opportunity to take that connection to a new level, and further strengthen those ties between MLS and craft beer. We’re excited to work with Land-Grant and share Stoppage Time with Sporting Kansas City and Columbus Crew SC fans alike.”

Both beers will be available in cans and on draft. Matchday American Pale Ale (Peticolas) will launch in the Land-Grant taproom on Wednesday, August 9 and Stoppage Time Hoppy Saison (Boulevard) will debut on Sunday, August 27. The collaborations will also be available at events leading up to the matches as well as at Mapfre Stadium on the respective matchdays. Both beers will retail for $9.99 per six pack.

When we invited the dedicated supporters of Columbus Crew SC to our taproom to taste-test the beer that would become Glory, this deceptive dark brew finished just shy of the top of the table. Despite its dark complexion, For Columbus Black Lager drinks super smooth and easy with just the subtlest touch of roast, making it the perfect beer for a late summer night-match.

Our partnership with the Crew SC began in 2015, and collaborating with the team is something we look forward to each year. In 2016 we were awarded the Corporate Partnership Activation of the Year based on efforts around Glory. The 2017 season officially kicks off on March 4th with the home opener against the Chicago Fire, but we’ve been preparing for the last couple of months, making sure Glory is ready for the big day.

From the first discussion around Glory, we knew we wanted to make sure the fans had a say in the style and ingredients. As loyal supporters, ourselves wanted to develop Glory with others like us and assembled a panel of fans who would help us decide the beer style, ingredients, and name. We produced two batches of both black and gold beers that were put up for a vote. After two rounds of taste tests, the Citra based American Wheat was announced the winner and we got moving on the first full batch. The name ‘Glory,’ was a natural fit, derived from the longstanding supporter chant, “Glory to Columbus!”

We are constantly seeking to improve our beers from year to year, and this year’s version of Glory includes the Huell Melon hop, addeded toward the end of the boil. This addition brings enhanced melon centric aromas with subtle notes of strawberry and citrus, amplifying the already fruity aroma of the beer. We like to think that it’s a beer light and refreshing enough for hot summer days in the Nordecke, but flavorful enough to drink at a bar taking in an away match.

The Gory launch festivities will begin in the Taproom at noon on February 26th for both cans and drafts. 6-packs will roll out to retailers the next day and drafts will be available throughout the city for the Crew SC home opener on March 4th at 1pm, after the official draft launch event on March 3rd, with our friends at 4th Street Bar & Grill, starting at 5pm.

On Opening Day, we hope to see you at the Taproom, where we’ll be celebrating the season kick-off, starting at noon. If you’re also attending the game, be sure to stop by our stand inside Mapfre, located in the lower concourse on the East side os the stadium.

Here’s to a new Crew SC season and Glory to Columbus!

Fun times, and a great atmosphere this past Friday night for the USA vs. Mexico World Cup Qualifier. We met wonderful folks from near and far, thanks to those who stopped by and enjoyed a beer with us.

Here’s your 8th and final Matchday Original poster for this weekend’s matchup against the New England Revolution. Hand printed, signed, and numbered 18×24″ prints will be available at the taproom on the day of the match, Sunday (9/25), when we open at noon. Prints are also available beginning the day after the match, online. This completes the set for the 2016 season.

Here’s your Matchday Original poster for this weekend’s matchup against the LA Galaxy. Hand printed, signed, and numbered 18×24″ prints will be available at the taproom on the day of the match, Saturday (9/3), when we open at noon. Prints are also available beginning the day after the match, online.

Here’s your Matchday Original poster for this weekend’s matchup against San Jose. Hand printed, signed, and numbered 18×24″ prints will be available at the taproom on the day of the match, Saturday (8/27), when we open at noon. Prints are also available beginning the day after the match, online.

Fun fact, the binary making up the checkerboard pattern translates to “Be Massive!” 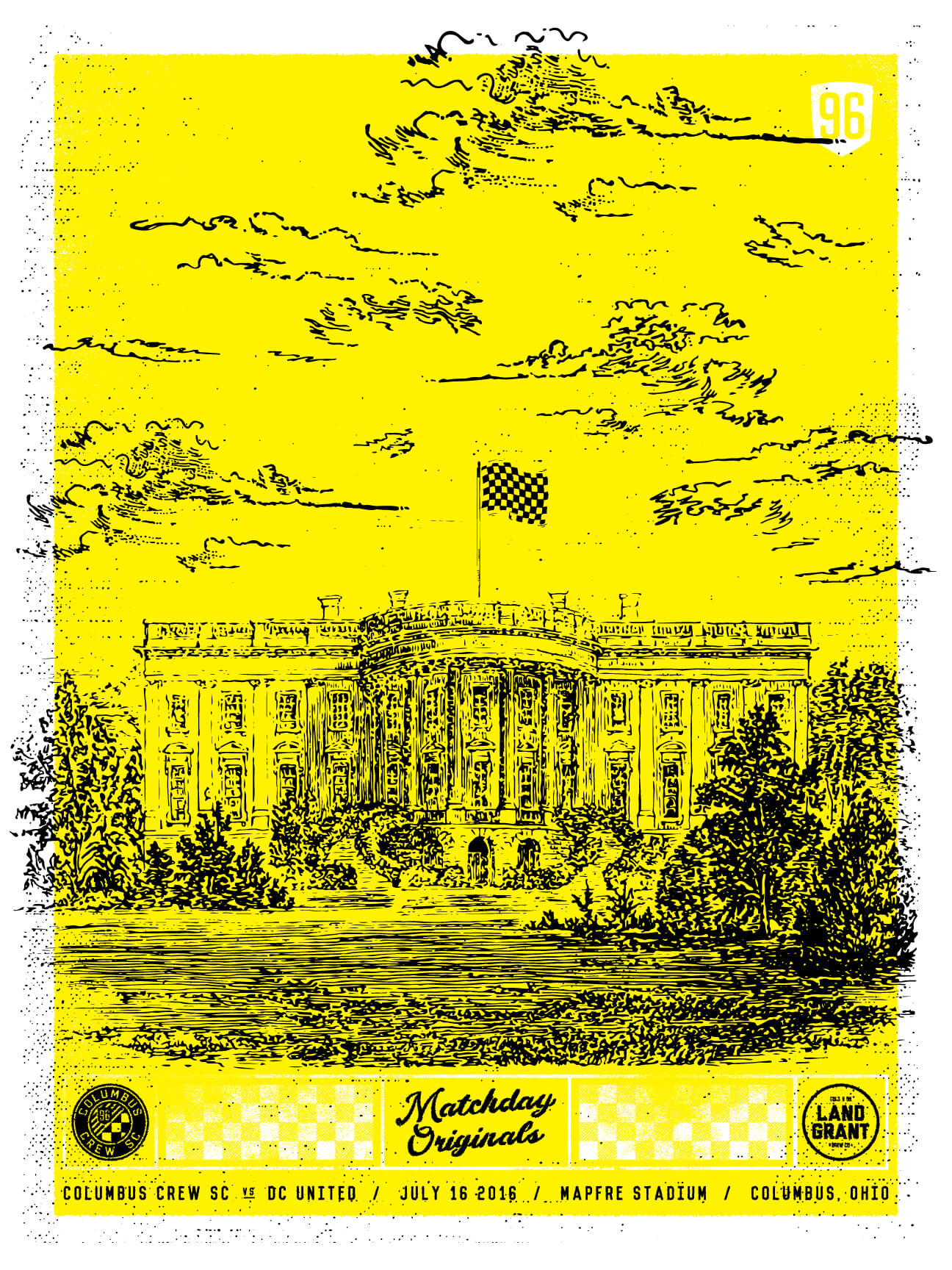 Here’s your Matchday Original poster for this weekend’s matchup against DC United. Hand printed, signed, and numbered 18×24″ prints will be available at the taproom on the day of the match, Saturday (7/16), when we open at noon. Prints are also available beginning the day after the match, online

Are you a hophead looking for the freshest IPAs in town? Subscribe below to get Text Message alerts anytime we can one of our hoppy beers and be the first in town to enjoy a fresh batch of lupulin delight.

LOCAL DELIVERY ONLY AVAILABLE FOR ORDERS OVER $40 (1 case). We will do our best to get deliveries placed before 12pm out the same day.
Please allow 20-30 minutes for us to pull pick-up orders. Pick-up is from 3p-7p M-F 12p-4p Sat/Sun Dismiss