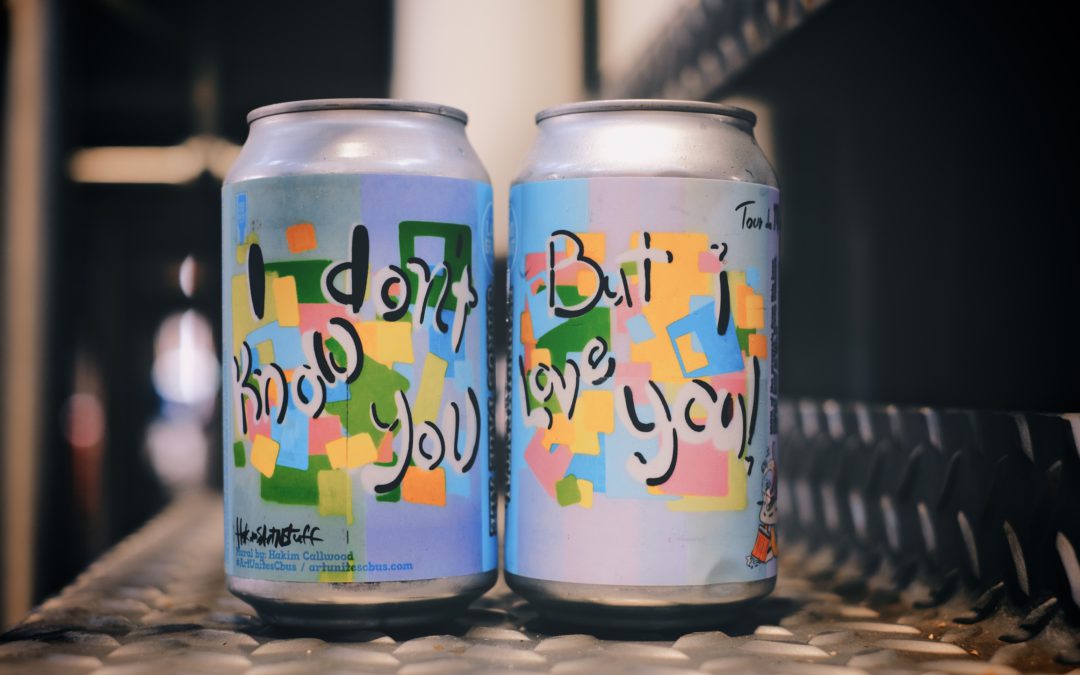 Art and Community are two cornerstones of Land-Grant Brewing Company, so we are proud to support local artists and showcase their work and impact whenever we can. As events slowly begin to safely come back, we’re excited that Land-Grant will get to feature local artists during each Franklinton Friday this year.

Our first artist feature is a really special one to us. Not only does Hakim Callwood’s work live all over the city of Columbus, but we are lucky enough to be surrounded by his art right here in our own backyard in Franklinton.

Want to see what we mean? Take a virtual tour of Hakim’s 2020 murals here.

We partnered up with Hakim on a limited-edition experimental citrus pale ale beer, with the label featuring one of his most popular and impactful murals – “I Don’t Know You, But I Love You”. Releasing on Friday, April 9th, 100% of the proceeds from the beer will go to supporting his nationwide Tour De Mural initiative.

TOUR DE MURAL
With increasing notoriety throughout the Columbus community, especially with the influence of his art during the Black Lives Matter protests in the summer of 2020, Hakim decided to safely take himself on the road to share his passion. Coined the “Tour De Mural”, Hakim and video producer and director Max Rodriguez have set out to meet artists across the country to hear their stories. With goals of putting up new art in the cities they visit and making new friends along the way, the pair are capturing their experiences for a docu-series that shares the Tour De Mural name.

Episode 1 of Tour De Mural is available on YouTube now, and episode 2 of the series will be premiering at Land-Grant on the evening of Friday, April 9th in the Beer Garden.

Hakim and Max will also be available after the April 9th screening for a Q&A session about their Tour De Mural project.

THE STORY OF THE MURAL
Hakim completed the mural, “I Don’t Know You, But I Love You” as part of the #ArtUnitesCbus project in the summer of 2020. Through a city-wide movement initiated by CAPA and Greater Columbus Arts Council, local visual artists were employed to paint murals on plywood that was installed over broken windows that resulted from protests throughout downtown Columbus. The impact of this art throughout the city was so great that it drove public demand for the preservation and exhibition of the murals.

The message within Hakim’s powerful and widely regarded mural became one of the most notable pieces within the #ArtUnitesCbus initiative, which has made its way on the #ArtUnitesCbus mural exhibition tour throughout Central Ohio. “I Don’t Know You, But I Love You is currently on display at Denison University in Granville.

LEND YOUR SUPPORT
If you’re interested in lending your support to the Tour De Mural, but can’t make it out to the event, you can donate to their Kickstarter campaign through May 6, 2021 here: https://www.kickstarter.com/projects/tourdemural/tour-de-mural