The Beer In My Food: Beard Crumbs Cheesecake 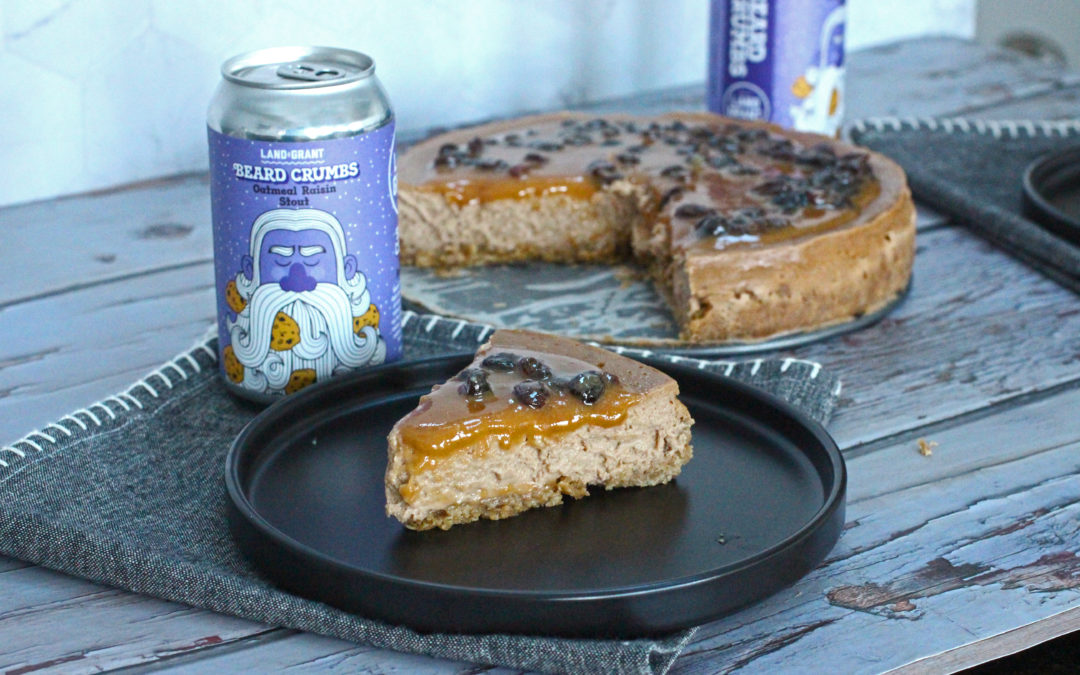 A Land-Grant Collaboration with The Food In My Beard

In our continued collaboration with Columbus-based cookbook author and blogger Dan Whalen, known best for playfully crafting unique flavor mash-ups and turning them into must-try recipes on his blog “The Food In My Beard” – we bring you: “The Beer In My Food”. This fun series showcases creative, must-try recipes that incorporate Land-Grant beers into your cooking, baking and cocktailing. Just in time for the holidays, Dan has brought us the ultimate combination to make a new twist on your favorite holiday dessert – a cheesecake made with our Beard Crumbs Oatmeal Raisin Stout.

With a beer like Beard Crumbs – a stout that’s teeming with notes of chocolate and coffee and offers a punch of sweetness from the addition of caramelized raisins, it’s no surprise that Dan was compelled to incorporate it into a dessert. However, when Dan first told us that beer works really well in cheesecake…and while we didn’t know that at the time, we certainly know it now.

Dan approached the recipe by breaking down each of the components of a cheesecake and working in bits and pieces of the Beard Crumbs flavor profile. Starting with the crust, he swapped in an oatmeal cookie crust in place of the usual graham cracker base. He incorporated a cup of our Oatmeal Raisin Stout into the cheesecake mixture, and topped the final product with a salted raisin caramel that resulted in major oatmeal raisin cookie vibes with a fantastic cheesecake texture.

2. Make the crust: mix all the crust ingredients in a bowl until combined. Make sure to fully incorporate the butter. The crust mixture will be crumbley. Line a 9-inch springform pan with parchment paper and lots of butter. Press the crust into the pan, pressing it slightly up the sides of the pan as well. Bake for 10 minutes, remove from oven and allow to cool for 5 minutes

4. Make the topping: Put the raisins in a saucepan with the sugar and honey and stir to combine. Turn on medium high heat and allow it to melt. Do not stir it during this part, just slightly swirl the pan if needed.

Once the sugar is melted and turning a deep brown, add in the cream. It will bubble aggressively. Swirl the pan at first to combine, then after about a minute you can stir it slightly. Remove from heat.

When ready to serve, pour the caramel sauce over the cheesecake.

Be sure to post and tag Land-Grant and The Food In My Beard when you make one at home. If you’d like to find Land-Grant’s Beard Crumbs Oatmeal Raisin Stout at a retailer near you, you can use our site’s Beer Finder tool here.

A Bit About Dan

As the founder and creator of the highly popular blog, The Food in my Beard, Dan has authored several successful cookbooks, including his upcoming release: Nachos for Dinner: Surprising Sheet Pan Meal the Whole Family Will Love. Dan’s Nachos for Dinner cookbook is available for pre-order now and will be available in stores in January 2022.

He and his wife, Georgina, currently reside here in Columbus, where Dan works as a full-time blogger and writer. Keep up with his latest creations on his TFIMB blog or follow him on Instagram, Facebook and TikTok.