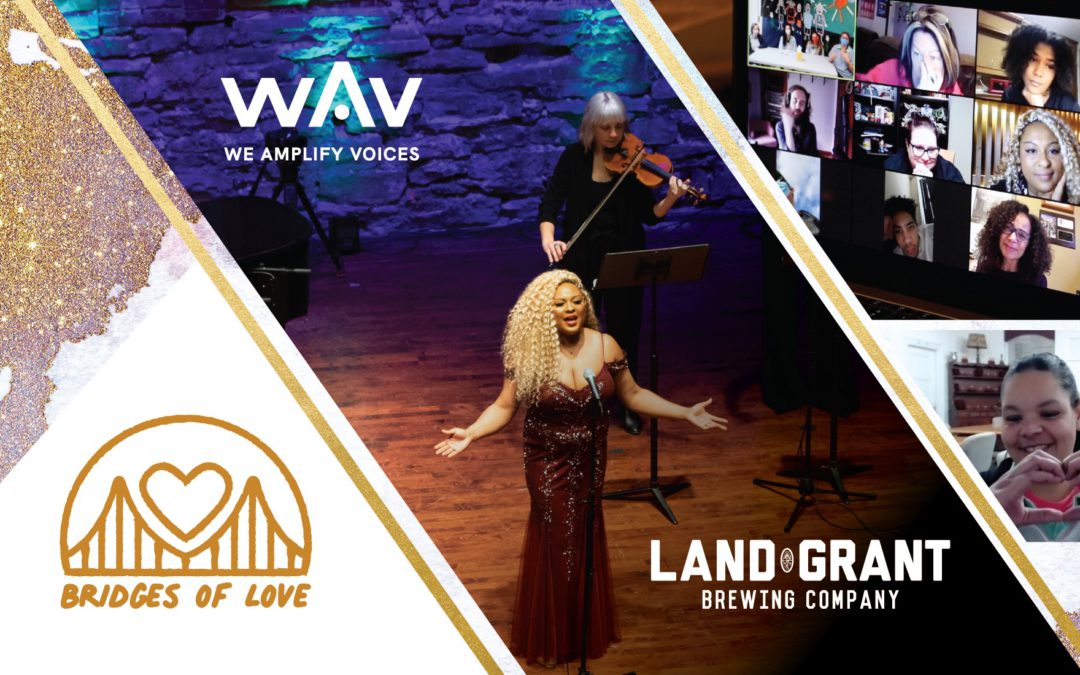 Over the last year, our friends at local non-profit We Amplify Voices (WAV) have been working on a healing songwriting project called Bridges of Love. WAV, whose mission is to empower and amplify underrepresented voices through songwriting, came together to tell the stories of 25 mothers in the Tapestry recovery program at the Ohio Reformatory for Women, reconnecting them with their children and bringing their families together.

Thanks to the support of the Greater Columbus Arts Council, the Columbus Association of the Performing Arts, WOSU and more than 50 GoFundMe donors, WAV was able to cover the costs of the workshops and song production to bring this Bridges of Love project to life, documenting the project from its inception in order to share the story of resilience and healing with others through a film.

While the initial programs were intended to be in-person, WAV ultimately facilitated workshops online over a series of Zoom sessions this past winter, due to the limitations of the pandemic. These digital workshops paired the incarcerated mothers and their children with local musicians and producers to tell their stories, working together in small groups to compose and produce a collection of songs about their shared experiences.

The Bridges of Love film will feature special in-depth interviews with several of the women, children and musicians that participated in the workshops, as well as guest interviews by David Brown (Harmony Project), Annette Dominguez (former Tapestry Director), and Warden Teri Baldauf (Ohio Reformatory for Women).

View the offical trailer below, including a sneak peek at some of the singles from the Bridges of Love project.

Just in time for Mother’s Day – we are thrilled to be hosting the public premiere of the Bridges Of Love documentary in our spacious, socially distanced Beer Garden on Monday, May 10 at 7PM. In addition to the premiere of the film, there will be a short Q&A with former Tapestry Director Annette Dominguez, musician Amber Knicole and documentary producer Tiera Suggs about the making of the project.

In the event of inclement weather, the rain-date for the premiere will be Wednesday, May 12.

We hope you’ll join us to experience the power of this documentary, showcasing the care and creativity within each of these songs that the women at ORW and their families wrote together.

WAV, formerly known as The Dick & Jane Project, was founded as an after-school music education program by Columbus-based charter school administrator Ben Shinaberry in 2011. Over the last ten years, WAV has since provided programming in over 25 Franklin County schools, serving between 80-150 elementary and middle school students annually.

Under the guidance of a team of professional musicians, producers, videographers, and visual artists, WAV’s groups take the content of their conversations and create a professionally recorded song, music video, and visual artwork to accompany their song. These are then shared on all music and video streaming platforms to carry their message to the broader community. Working primarily in underrepresented communities, our mission is to lift up the voices in our circles to reach the larger community and continue the conversations that start inside of our workshops.

WAV sessions focus on building self-esteem, character, and collaboration skills aligned to Social Emotional Learning strategies. Through interactive activities, small group discussions, meditation and mindfulness exercises, and music, students get to know themselves and develop respect for themselves and others, awareness of self and emotions, self-regulation skills, problem-solving and critical thinking.

For more information on how you can get involved with WAV to show your support, visit https://www.weamplifyvoices.org/how-you-can-help.