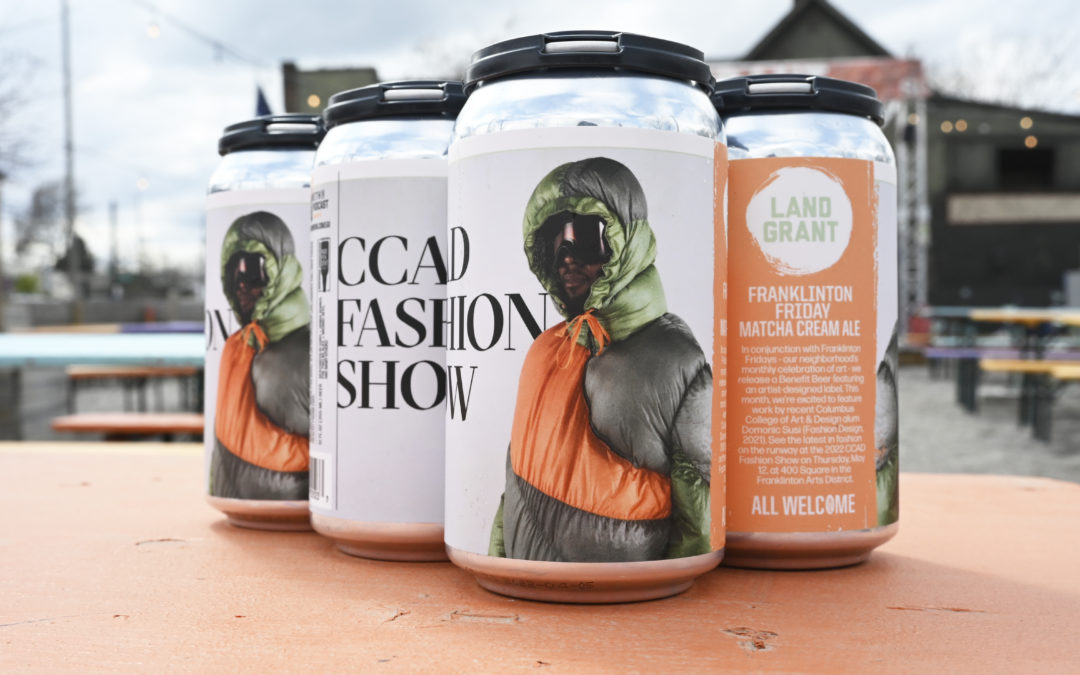 Our March Franklinton Fridays Benefit Beer has a slightly different perspective on featuring local art – this time, by highlighting a nOn this month’s Franklinton Fridays Benefit Beer label, we’re highlighting the Columbus College of Art & Design in celebration of the impact and deep presence that CCAD students and alumni make right here in Franklinton. As a matter of fact – the 2022 CCAD Fashion Show, scheduled for Thursday, May 12, will be held right across the street from our Taproom at 400 West Rich inside 400 Square.

Despite what his design may imply, Dom’s background didn’t begin in fashion design. After dropping out of business management school at San Diego State University, he moved to Brooklyn and worked as a real estate agent for about 4 years. As he spent every extra dollar he had on clothes down in Soho, he developed a desire to make clothes himself, and began learning the world of garment manufacturing in Brooklyn.

“After spending all this money to get my first collection made  – (and it was terrible now looking back) – I realized how little I knew and decided to go back to school for design,” Dom said. That’s where CCAD came into play.

Dom’s design featured on the label is part of a collection he called Cascading Epinephrine. He was inspired by the actions that cause the rise and eventual drop of the hormone adrenaline. His collection features mountaineering silhouettes that are goose down-stuffed, rip-stop nylon garments.

“I like to think my stuff is really organic, fluid, and has a playful dreaminess to it,” Dom said as he explained his designs.  “I just try to create as much as I can. A lot of people get so caught up trying to make things so perfect that nothing ever gets made, so just putting something out for people to see is half the battle at times.”

Dom spends his days working on the men’s technical design team at Abercrombie and Fitch, and enjoys snowboarding in his (winter) free time. He’s been focusing heavily on 3D apparel design and working toward gaining the skills to create an entirely digital runway show for the display of his next collection, which he would love to use to bring digital fashion to the forefront of Columbus Fashion Week.

—
The 2022 CCAD Fashion Show will be Thursday, May 12, with showtimes at 6:30 p.m. and 8:15 p.m. Land-Grant’s own Walt and Erin Keys will be co-hosts of this year’s CCAD Fashion Show, alongside CCAD Trustee Jennifer Pick and Iain Grant. A limited number of tickets may still be available; all proceeds benefit CCAD student scholarships. To learn more information about the show, visit ccadfashionshow.com/tickets.